Last week, I had the awesome opportunity to accompany a few of my National Writing Project colleagues, Christina, Chad, and Peter, to London to participate in MozFest–a production-centered gathering of “Crazy Mofos” who believe the web should be open, accessible, and collaboratively built.  As teachers, we  were there to make teaching resources or “hacktivity kits” as part of the Teach the Web strand– and to feel and reciprocate the Mozfest “love bombs” of inspiration, collaboration, and appreciation.

To facilitate these making sessions called “scrums”,  the intrepid space wranglers Laura and Kat from Mozilla detailed our make ideas on colored cards and posted them on the wall under the “To Make” category.  As the weekend progressed and we worked on our own and other’s scrums, we moved those cards into the “Making” and “Made” categories– a brilliant color display of the innovation happens when the right people form cross-functional teams and plug into the right tools.

During the scrum sessions and during the Friday night science fair and the Sunday night demo, I floated around the floors of the openly-designed Ravensbourne College building (with the ghost of David Bowie, their most famous alum) talked and made with folks in Open Science, Open News, Make the Web Physical, Open Badging, Teach the Web, and Open Gaming.  As a grant writer, I am thankful I met the folks from Census Reporter who are making the latest census data accessible, usable, and visible. As a teacher, I’m happy I met Sam and Elsa from Hive Chicago who are embodying connected learning theory and letting young people lead the way.  As a digital writer, I am stoked to have had good conversations about new media with and mentoring in Popcorn from Patrick who was patient while I made an animated gif with a new British grunge soundtrack.  As a maker and a parent of a maker, I am thrilled to have met Super-Awesome Sylvia and her parents who were kind enough to put the watercolor maker-bot to work in service of a custom Doctor Who tardis painting for my son, Calder.

In terms of my own make, a hacktivity kit for teaching critical storytelling with Mozilla X-ray Goggles, I riffed off of Doug Belshaw’s session of Mozilla’s Web Literacies and benefitted from good feedback from NYC Hive Teacher, Jeannie.  At Doug’s session, both Peter and I were interested in the making of this framework and struck by what appeared to us as a functionalist approach to thinking about how we make the web.  We talked with Doug briefly about this noting that, to us, the framework seemed to articulate a core set of web skills, not web literacies, which we think about as socially-constructed and wrapped up with the interplay between tools, humans, and cultural meaning-making practices.  Doug argued that the framework was bounded in web-only practices and noted that these were not digital literacies but web literacies–core practices that were essential to building the web, as opposed to living an being in a digitally-mediated world.  Still not satisfied, Peter and I pushed at this, asking about the critical and rhetorical lenses that we bring to web-building and teaching the web, practices that are never neutral and are always already wrapped up in questions of audience, purpose and context as well as questions about power and privilege.

I asked Doug if I could remix the web literacy standards and re-situate them in a more humanist framework that considered functional, critical, and rhetorical approaches to web-building.  Citing the consensus Mozilla had finally reached over this framework, he said no.  So I used Thimble to create a hacktivity kit called X-ray Goggles for Critical Web Literacy.  My objective– to remix the framework and situate some of the functional skills detailed in the “Building: Creating for the Web” inside a meaning-making framework that acknowledges making as a rhetorical act and forces us to ask, “Who gets to make?  Why?  And how?” 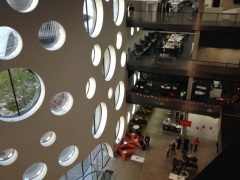 While focusing on the critical and rhetorical aspects on the web, people will also learn basic concepts of HTML, CSS and the Open Web, building critical, rhetorical, and functional web literacies…Participants will understand that web making involves making choices about audience and purpose (rhetorical), who and what gets featured and what doesn’t (critical), and how to combine and remix the building blocks of the web (functional).

To me, these practices, such as remix and hacking, are not limited and bound by the web.  Instead, they are practices inspired, facilitated, enabled, and/or proliferated by the web and grounded in an open ethos that guides the way we play with others and their compositions.  And this is the ethos I experienced most passionately at Mozfest– a collective identity and socially-constructed webbed literacy generated through the use of human codes to negotiate our relationships and meaning-making practices, both on and off the web.

I am an assistant professor of Writing and Rhetoric at the University of Rhode Island where I direct the First Year Writing Program. My research generates critical theories and practices for transforming the teaching and assessing of writing in the classroom as well as in community literacy settings. My scholarship has been published in journals such as College English, Journal of Multimodal Rhetorics, Community Literacy Journal, Journal of Adolescent and Adult Literacy, and Education Sciences as well as in several edited collections. Her forthcoming book Failing Sideways: Queer Possibilities for Writing Assessment (co-authored with Nicole I. Caswell and William P. Banks) with UP Colorado/Utah State UP is expected in spring 2023.

One thought on “Making with the Crazy Mofos”